Warning: this is a spectacularly geeky fangirl post for niche audiences only… 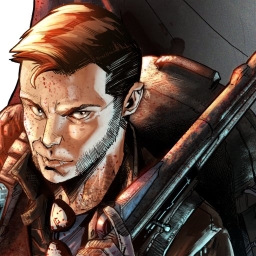 Knackered before my day has even started today; slept lightly and very poorly, before waking an hour early.

Essay deadline stress perhaps? Was I lying awake worrying about getting it done though?

Yes, i’m undoubtedly under a bit of stress what with the end of term, and the essay/other uni commitments, but I’ve got a bit of an internet crush on my favourite game streamer.

Yes, I will always love the team at Funhaus – much as Kovic is aesthetically pleasing I know that in real life the nerdy misanthropic rage puppy that is Lawrence would be more my jam – but I’ve been taken by the Mr Moon love rather swiftly.

I suppose he’s not that improbable, as i’m a sucker for non-conformist, outgoing guys whom are good with their words and can make me laugh my drink through my nose. Or, he’s an engaging broadcaster good at connecting with viewers, and it’s been years since i’ve had any sort of proper intimate connection with a man, and so i’ll take the odd crumb of comfort now-and-then? Christ.

When combined with a poor night’s sleep, spending hours listening to someone talk shit whilst they make digital avatars slay dinosaurs, or run around desolate post-apocalyptic wastelands led me to actually having a dream about this person I will never meet. Oh dear: 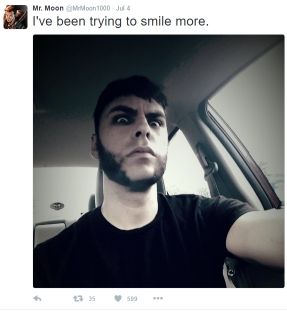 I was the form tutor to a class of pre-teens, Moon a tutor in the classroom adjoining mine. He was late, and when I stuck my head around the door of his room to check whether he’d turned up, I caught his gaze with a smirk and a “Moooon… You’re *here*!” which he returned with a comedic death stare then a laugh.

As he was mid-paper shuffle at his desk, I walked in and for some reason decided to sit in his lap. He was wearing a bad jumper. The chair creaked in protest. My skirt suddenly felt indecently tight.

He looked down at me (he’s pretty tall and I have a short torso) with an amused, curious expression that seemed like he was analysing every atom of me. I noted the manfur just visible at the neck of his shirt and thought he smelt pretty damned appealing. Suddenly embarrassed I said, “Oh, let’s see if I can start my morning even more awkwardly…” squirmed up, blushing, and legged it round the corner.