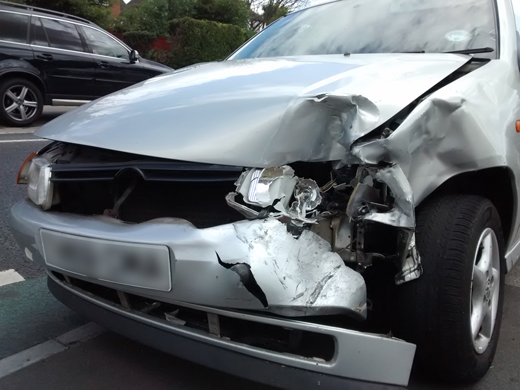 Yesterday: Two x-rays and an EKG say i’m fine, other than bumped knees, sore arms and very sore neck muscles, and a deeply bruised sternum. It hurts when I laugh, move around and oh, breathe. My breast bone is very tender and there’s a livid stripe under one boob – this was from the seat-belt restraining me when I got hit. Police and NHS were great – got through the system in under 4 hours woohoo #ilovemynhs. Met a nice doctor named Simon :)

MR T on the other hand, is probably a write-off. The damage doesn’t look too bad, but the passenger-side door is out of alignment, so the chassis is probably bent and it will cost more than the car is worth to fix. And i’d just got it MOT’d and renewed its insurance too grrr.

On my way back from the supermarket, a woman in a 4×4 who was driving whilst wearing flip-flops – with her five year-old twins in the back (WTF???) – decided to pull out of the petrol station forecourt and into oncoming traffic i.e. me doing 35mph on the main road. Had enough time to take a horrified sharp intake of breath, bang the anchors in and steer right in an attempt to avoid hitting her much bigger taller car, but wasn’t successful.

Luckily, hitting her car stopped me going into oncoming traffic – very generous of her. All in her car were fine, other than a cut the driver received from her fucking flip-flop straps…!

She admitted full liability which was good, and as I had a car full of food, I was able to have a picnic whilst I waited for recovery to come and collect my car; conveniently I was nearby a bus stop so I could drag the contents of the car and myself onto the bus. Could have been a lot more annoying in terms of getting myself home, and A&E is within walking distance.

I loved my little car and although I did my best to look after it, it was old, so the amount I will get offered by my insurance will not be very much if it’s written off. I’m going on holiday next week, so financially losing a car has not come at the best of times, but I have enough saved to replace it and it’s not like I have to rush to do so – I don’t start back at work until September, and I can walk or cycle to work. Still, it’s money I wish I didn’t have to spend, and I have no car. And I feel like i’ve been sat on.

But, Olympics, Mr Moon and ibuprofen to the rescue!
posted on Tuesday, 9th August 2016 at 15:42 permalink