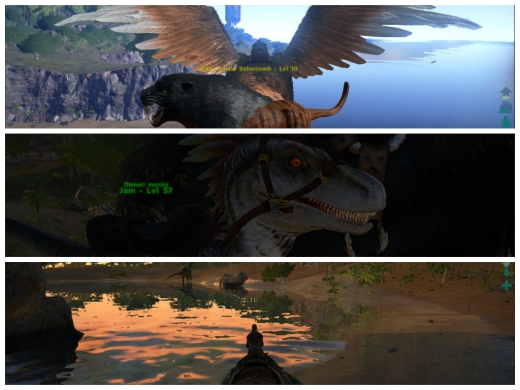 Spent my Valentines day in the romantic embrace of ARK – I tamed a Raptor and a Sarco (giant crocodile) yayyy! It wasn’t too hard, but I get so nervous about tackling dinosaurs that could potentially kill me – or more importantly my mount – that it takes me ages to work up the guts to do so. This is my exciting life :D I will have to explain my naming system for my dino pets in another post – My Raptor as you can see is named Jam, my Sarco Tube :)

Other than that – McCy birthday dinner where I was pleasingly anaesthetised by the time I was on the bus home; uni for two days where I felt slightly better about the ominous essay lurking ahead of me. Slightly, mind. Also there was some behaviour from one of my course peers that was mindbogglingly poor, which I will permanently store in the back of my mind. Moving on…

Most important event was something not involving me – Bobby Convey gave birth to a small healthy human and just about survived the process (I think an emergency c-section may have been involved). That makes two-for-two labouring friends having had one – fun! I think she’s okay, but, birth, what a shitshow. Doesn’t encourage me in any way whatsoever.

Also, got my hair streaked neon cherry and (s)lime green :)

For the first time in – oh, years? – I blitzed my way through a piece of fiction. Yes, actually got away from the internet, into my blanket and hot water bottle cocoon early so I could spend time reading. It was hugely enjoyable – finally giving in to tiredness and putting the light out because I didn’t want to put the book down, eagerly ploughing though the book the next morning so I could finish it over the weekend. 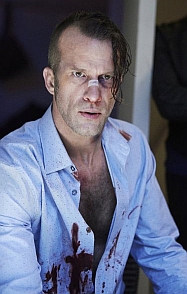 It was the first in a space opera series called The Expanse – I was inspired to read it because of my appreciation of the TV series and the to me hugely appealing character the delightfully rough-hewn Thomas Jane plays – he has spectacularly bad (read: excellent) hair, dresses like a sort of Forties gumshoe and gets increasingly beaten up as the series progresses. Glorious.

Anyway, I often find it hard to read through papers for uni, indeed books in general as I am convinced that my attention span is dwindling as exposure to the internet rots my brain. I’m getting old too.

I suppose being engrossed in a book is another way to shirk what I could or should be doing, but it feels a bit more valuable even if I can’t really say i’ve learnt much. Have ordered the next in the series nonetheless.