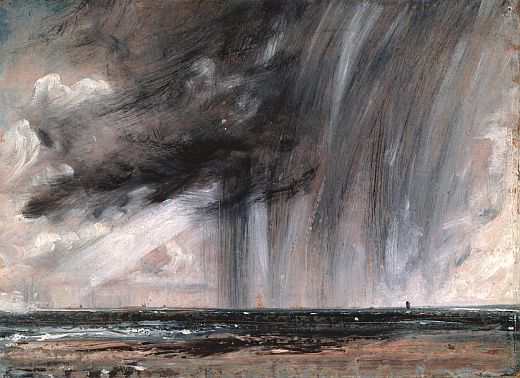 John Constable
Rainstorm Over The Sea
1824-28

Been thinking about Petrichor quite a lot over the last week or so; I was very surprised to see him pop up on my OKCupid feed as it notified me that he’d visited my profile and announced he was back on the market.

I am sad to say he still looks hugely appealing; in one of his photos he wore an awesomely hideous/beautifully lurid blazer that is exactly the sort of thing I would take great joy in wearing. Sigh.

A while back he sent a reply to my thanks but no thanks message i’d sent turning him down for Facebook friends; it was an interesting somewhat odd message that seemed to be full of longing, discontent and sadness. I ran it past Caversham Princess to see what she thought – was it just me? – and she agreed, saying that when he turns 45 he’ll be probably be struck by what a fucking moron he was to not give things a go.

If two people miss being around each other, and think of each other often, why is one of them not on a plane already?

I will happily invest in a plane ticket for him if that means that, after having spent some time sorting himself out, we can spend some quality time laughing our socks (and clothes) off together (I would like to point out that I appreciated both his brain and his body). New job = new salary = new possibilities.

Better not hold my breath, eh.