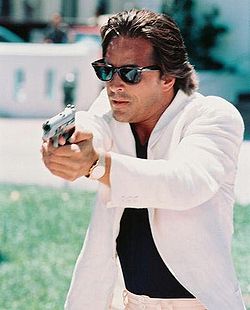 So now after a couple of episodes I have a new celebucrush to go along with my Hawaii Five-0, Scott Caan loving: Don Johnson as Sonny Crockett circa 1985.

I can multi-task after all…

Det. Crockett is too pretty but with too much of an edge to be standard pin-up material; the fashions are horrendous and I really should know better- Just like my so wrong yet so right appreciation of Sonny Crockett circa 2006 (as played by Colin Farrell). I should also say that I am only loving Johnson as Crockett when he is *not* rocking the mullet.

This afternoon I have been eagerly searching for a Miami Vice logo t-shirt, but alas I can never seem to find just the right one – I want the classic logo on a t-shirt that is not white or black.

I’ve also been daydreaming (and researching) about dressing up a la Crockett – the wide shouldered white suits and pleated trousers, the Ray Bans, the slicked back hair… I think an entire outfit would be *brilliant* but I think a hell of a lot of charity shop trawling is going to need to be done. I take my costumes *very* seriously as you might know.

I have an idea that I might enjoy being Crockett for an evening as dressing up all male can sometimes give me a little power trip that’s mighty enjoyable for a few hours.

It’s a bit odd having a celebucrush on someone who seems to be from a completely different time period from me but hey, whatevs. Gives me new daydream material… and I am eagerly awaiting the delivery of twenty-two episodes from the first season. Whooop!
posted on Sunday, 30th January 2011 at 22:40 permalink