In the ad breaks for The Ultimate Fighter: Heavyweights they trail the UFC Undisputed game and from this I have been made aware that after what, thirty or so years of game evolution, we have now reached a point where the ring girls’ breasts gently bounce as they walk around the octagon. Clearly a pinnacle of simulation programming. 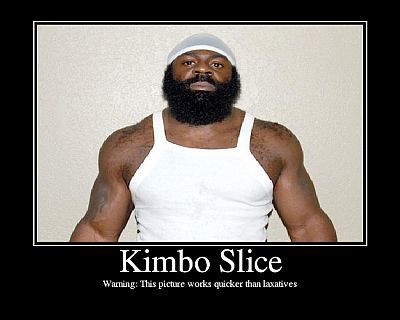 TUF is rather interesting in that they have the fabulously named Kimbo Slice on one of the teams; he is more of a hard bastard and street fighter than mixed martial artist, so although he clearly means business, he was beaten by an awesomely slobby opponent with far more finesse on the skills side of things (Roy Nelson).

I haven’t watched any UFC for a long time so it’s nice to be able to take in the series. I was supposed to be reading and correcting several essays from my students but shopping, lounging and yes, McDonalds (comfort food) got in the way. Sunday brings lunch with a group of people who I have not seen in a very long time indeed; I am looking forward to it greatly.

My Dad came through his operation fine with many gallstones found when they took his gallbladder out. Ick. I’m still waiting on the clinic referral front and there are only a few days left of being invisible to radar. I wonder what comes next…?
posted on Sunday, 4th October 2009 at 00:41 permalink