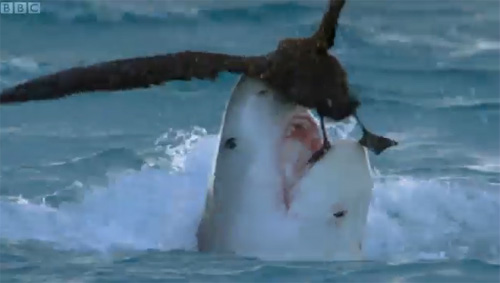 I think that as time is passing I am becoming more sentimental in my reactions to things that would not have done so before. Now, maybe this is because I am becoming more mushy as I age or maybe it’s down to too little sleep or near continual non-relationship angst; maybe i’m just feeling things more, or perhaps I express emotional pain better?

I would have thought that as I clocked up the years I would have become inured to certain things, not go backwards and be affected where I wasn’t before. Case in point: The series on the South Pacific that’s on television at the moment. Beautiful blue seas, amazing animals and fascinating tales of human migration. Included in the amazing animals category is the Tiger shark, a rather large beast that is famed for eating pretty much anything going.

These Tiger sharks congregate for two weeks each year off the shores of a small Hawaiian island where fledgling Albatross offspring are attempting to make their maiden flights. These birds have a large wingspan and the area available for them to practice flying is not sufficient so more often than not they end up splashing down into the shallows just off the beach. In the water are the sharks. You can guess the rest.

When I watched the feathery feeding time in the past I would think of how it was nature just doing what it does and would not become upset in any way. Now I watch it and shed tears for the Albatrosses, inwardly cringing when I see a webbed foot right on the edge of the gaping maw of the stripy predator.

Am I more sentimental? I don’t know- I still accept that this is nature in action, it’s just that there’s something else lurking below everything. Maybe empathy? If that’s the case is that the same as anthropomorphising the creatures in play? I don’t think so.

I think the causes behind my new found weepiness are many and I don’t think there’s one in particular. It just seems a bit strange to be getting upset over what seem to be trifling things, and by upset I don’t mean a couple of tears- they are always hot, and I feel in quite a lot of pain when I shed them. It hurts to cry over the plight of the disappearing honeybees…
posted on Thursday, 28th May 2009 at 22:38 permalink