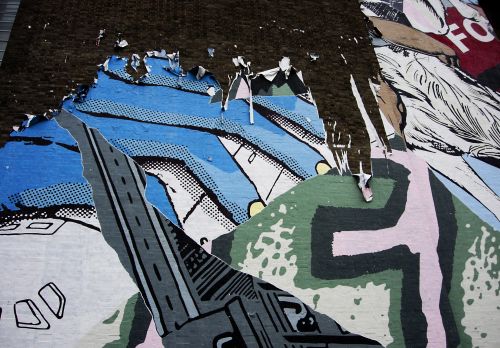 I’ve had a relatively eventful few days of late, exposing myself to some art, meeting up with people, drinking more than one glass of wine and dressing in things other than combats and t-shirts. It’s been good, but I feel a little washed out by it all.

On the subject of washed out, I am currently totally hating on weather prediction as I left my washing outside to dry on the basis that it would start to rain much later in the afternoon. Naturally it chucked it down and by the time I brought all my clothes in they were completely soaked. I was *unhappy*. Now it has reached the time the rain was predicted to fall it is not raining. And hasn’t. For hours. Sigh.

On Wednesday I trekked into Lahndahn Tahn to Bankside and Tate Modern to take in the mini-retrospective of the work of Cy Twombly. I’d been meaning to go for many months, but now that I am a Tate member I am much more motivated to visit an exhibition, rather than just doing my usual thing of meaning to go and never managing.

I’ve seen odd pieces of his work in various institutions i’ve visited over the years but never so many in one place; I’d also not seen any of his early stuff so it was good to be able to see it and compare it to his more recent work and ponder the possible connection between it all.

I did not like his early work, which consisted of repetitive scribbly gestures on various shades of white; this early stuff was completely blown away by his later stuff that was richly coloured and much more ambitious in scale. It was gorgeous work, really beautiful and romantic and much more aesthetically appealing and it was no surprise that the last few rooms were much busier than the first few. Untitled (A Painting in Nine Parts) was especially awesome. 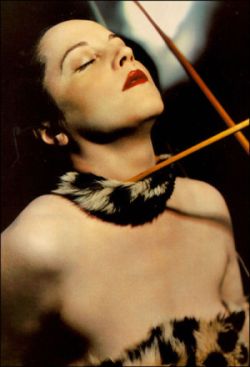 The Lady Milbanke as Penthesilea, Queen of the Amazons
Madame Yevonde
1935

As I don’t get to dress up as much as I would like to I decided to scare the locals by wearing an exceedingly tight, inappropriately short dress for gallery browsing, accessorised with seamed fishnets and my yellow wedges. I wore a suit jacket over the top in a concession to propriety and a long coat to travel.

It was amusing to be walking across the Wobbly Bridge and have my coat blow open despite my best efforts courtesy of the breeze whipping down the Thames; people’s eyes immediately homed in on my now exposed inner thighs.

I also found out that as soon as my heels announced my entrance into a room everyone would look at me. Hee. Tarty I suppose but it was nice to spend a little time exhibiting what I hide most of the time.

There are usually 365 days year, and lets be very, very generous and say that I dress up 24 nights out of that year.

I also wandered into the Street and Studio photography exhibition and came across a selection of amazing photos of society women by Madame Yevonde. As you can see from the image above they are beautifully coloured and composed, and at the same time a really quite weird. David LaChapelle eat your heart out.

I had fish and chips and cider in the café (getting ID’d for the drink) and watched a Mother be completely unable to meet her partner’s gaze after he threatened to smack their small son about because he couldn’t sit still. Fun times.

I went out for Leia Ewok Village’s birthday on the Thursday and then again with Caversham Princess and Bobby Convey on the Friday, so I was on the tired side by Saturday evening. I found myself tearing up to things that really should not have induced such a reaction; this situation was not helped by my viewing of a Godawful episode of The Closer– awful in a desperately sad sort of way. One of the detectives had his brother shot and killed, and his gradual meltdown was very difficult to watch.

I got woken up at 2.30 last night by my neighbours having a full-blown domestic; their doubly-glazed windows were shut tight but I could clearly hear the shouting through the walls and through the closed window. I decided that I could not simply put earplugs in and try and wish them away as I felt that I had to listen out just in case I heard the wife being hit. It lasted about twenty minutes and I spent most of that considering whether or not to call the Poh-leece and wondering whether I should dial the emergency number or the general contact one.

I couldn’t understand what was being said (thank you immigration) and it sounded like she was giving as good as the bullying prick could, I didn’t hear anything like crying or screaming so I just lay there and thought about their fucked up lives, finally getting to sleep about an hour later when the household had settled down.

As I lay in the dark I did my usual thing of thinking a lot, about how the events of this Summer have reminded me that I have to constantly moderate myself on a personal and professional basis. I am completely unable to communicate what I really think about people, for example my unhappiness with their behaviour, also I am unable to express my feelings on things, always having to hold myself back.

I think this problem boils down to how I consider it impractical or inappropriate to share my thoughts and feelings, that there is no point in doing so. Having anger living permanently inside my brain on a low simmering heat is difficult to deal with, as are the feelings relating to my wish for companionship and need for intimacy.

I wish I did not have to exist in such a constrained manner, and I do not think it is healthy to do so, indeed I think it’s highly damaging, but it’s the only way to get by. Until situations change I will not share, and there is only so much I can do to invoke the changes needed. Being frustrated looks to be on the cards for a long time to come.