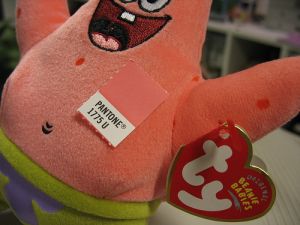 Life is dull here at Casa Monky; still no job, no job prospects until September; not been up to anything of interest. Have been writing (attempting to write) three classes worth of Year 7 reports. Have watched four series of Trailer Park Boys. Have become totally convinced it’s one of the best shows evah. Stripper shoes are permanently out-of-stock. Three weeks until unemployment.

After being called “too skinny to fit into skinny jeans” at work (I told them to shut up) I am convinced that I am getting more podgy, and it’s not even in a hormonal way. The cellulite appears to be spreading. Humph. Aand I know that cellulite is the natural way for humans to store fat but still, I go humph. I’m just having a fat week.

I’d love to have someone run their fingers along the meandering silvery marks, but alas staying under the duvet with Patrick is about as exciting as it gets at the mo.