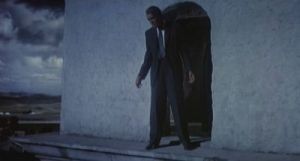 I spent my Sunday lazing under the blanket with Patrick. We had a good time together, although I cried at the senseless destruction of Dev and Paro’s love and was grumpy because I found out the milk I had left had decided to grow yellow blobs. Eugh. We also watched Vertigo for the first time in a few years and again I teared up as Jimmy Stewart stood out on the ledge whilst being buffeted by the wind. Must be one of those days…

Reservoir Dogs cheered me up.

Was it obsession, did Scottie know all along, or is everything he went through just symbolic of what we all go through when we love someone? I think I must be the ultimate cynical romantic- believing everything is bullshit but after enough persistance melting over the smallest most sentimental of things.

I’ve had a few drinks over the last few days and it gets difficult when the overly-relaxed mind wanders on to people you know you shouldn’t be thinking of. You want to say “Come out, come see me, let’s have some fun” but you know you are wrong and just deluding yourself with the past, with memories of good times that can never be. I shouldn’t be thinking of them… I shouldn’t have to make any effort… I did not do anything wrong… so why is it I am always the one left behind in their wake?

I appear to be so starved of affection that like I said above, the smallest things come to mean so much. People who can get affection at the drop of a hat see those small things that are so important to me as throwaway things, and therefore have a self-imposed licence to cut fast and loose with my feelings. I guess I’m just feeling fed up because I’m tired and because I spent the weekend out around town with various people asking how I was or offering opinions that he’s a fool and one day will wise up to what he’s done and what he’s missed out on.

I beg to differ; no-one has ever truely cared for me and thus will never wise up or see what they’ve lost because if they cared they wouldn’t hurt me in the goddamn first place. Ultimately, I’m just not that important to them.

Bloody hell, now I am thoroughly un-cheered. Must pick something else to distract myself… hmmm… Aliens?
posted on Sunday, 28th May 2006 at 21:39 permalink