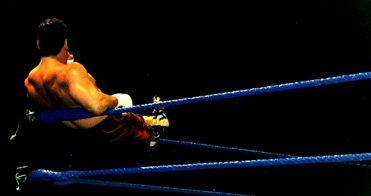 Eddie Guerrero was found dead in his hotel room this morning.

I saw him wrestle in London a few years back on a Smackdown! European tour. He was the bright spot of the evening, with personality shining through and high-flying moves amazing me. He was just such a great wrestler- His in-ring abilities were varied, being able to perform great mat work or dive off the top rope at a moments notice. Outside of the ring his promo work was well thought out and often quite emotionally intense, and he had a gift for humour that would be effective as either a face or a heel.

Cause of death has not been released but there is probable cause. Everyone knew he had drug and alcohol dependency problems over the years but I still felt a huge shock when I saw the headline on WrestlingDB. His life was back on track, having reconciled with his wife and family and successfully staying clean and sober for four years. Apparently he had breakfast with his nephew and another wrestler this morning and returned to his room to get ready to leave. When he didn’t appear his friends went looking for him and found him dead.

Far too many wrestlers have died at too young an age so I know severe injury and death in or out of the ring is a distinct possibility. A life on the road away from your family having to work through injuries takes it’s toll. It’s not steroids that get people, it’s being young and alone and in severe pain; this leads to numbing drugs of both the legal and illegal variety.

Whenever you hear a wrestler has died the back story to their death is often so sad and pathetic. Usually people are found dead alone in their hotel room either from a drugs overdose or that symptom of pain pill and steroid abuse an enarged heart. Or they go safely home to their friends and families and never wake up in the morning. Current thinking is that Eddie died from heart failure and maybe this is due to the years of abuse his body took.

Like Vampiro said as a wrestler you are basically a whore- used to perform and earn money but thrown away when your looks or talent fades. That’s not the case in this instance but it’s symptomatic of an industry that seriously needs to sort itself out. Enough workers have died, enough families have been left behind. Just because it doesn’t happen in-ring does not mean it it nothing to do with your business.

This is the first professional wrestler who has died who I have particularly liked. I never met the man and I saw him only from afar but he will be missed.